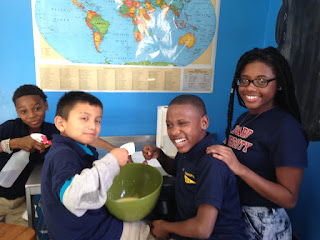 On March 17th, the BUGS Students hosted about 6 students from Howard University, one of the many historically black college and universities in the DMV. Those 6 Howard University students along with some others spent the day volunteering at Living Classrooms Foundation. The 6 college students spent their time with three of the BUGS groups. They were paired with Ms. Rachel and the Ladybugs in Gardening; Mr. Terry and the Spiders in Creative Art; and lastly, Ms. Brittany and the Grasshoppers in Cooking. 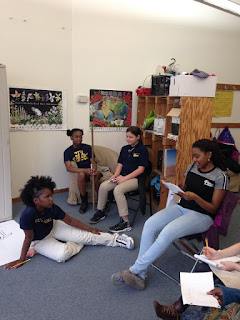 While with Ms. Rachel, the two Howard students were asked a series of questions about college. The girls asked about how is it to live in a dorm, what kinds of food do they eat in college, what kind of classes do they take, and what kind of music is played or allow in college. For many of our students, this was their first time interacting with a college student. It was a really great experience for them. It helped to make college very attainable and real for them. And after their question and answer session, the students assisted the Ladybugs with planting cucumber seeds for the BUGS Farmer’s Market.

Along with visiting Ms. Rachel and the Ladybugs, the Howard University volunteers also completed some work with Mr. Terry, the Creative Arts Educator, and the Spiders. They were able to assist the students with their homework and then transitioned into component time. The volunteers and BUGS students worked together to create tape wallets and earrings for the BUGS Farmer’s Market. It is our annual farmer’s market that happens the last Saturday in April on the 30th. 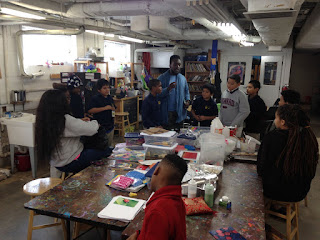 It was truly a pleasure having the college students from Howard University volunteer and visit our campus. It was a great experience for the BUGS students. It gave them an opportunity to see what their future could be. And that’s one of the things BUGS is about. 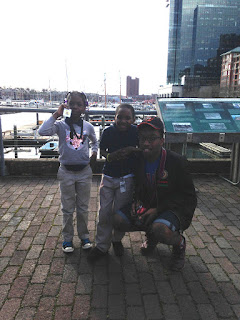 Algernon J. Campbell - Program Director
Mr. Algernon is originally from Savannah, GA. He is a graduate of Morehouse College. Upon graduating from Morehouse College, he attended the Ailey School and received a Certificate of Dance. He has danced nationally and internationally. He has lived in New York, Dallas, San Francisco, and Washington, DC. He eventually moved to Baltimore, MD. He was hired as the Dance and Creative Movement Educator. He eventually was promoted to Program Manager and then transitioned into the Program Director Position. He has been working with the BUGS After-School Program for over 10 years.

Ms. Kadija graduated from Morgan State University with a Bachelor of Science in Family and Consumer Sciences. She has always been passionate about working with students. Hired in the Summer of 2012, she began her tenure with BUGS as the Creative Arts Educator. After 3 years in this position, she was then promoted to Program Manager in 2015. During her free time, Ms. Kadija enjoys hosting craft parties and planning events. She loves to travel and spend time with friends and family.

Veronica "Ronnie" Anderson - STEM Educator
Ms. Ronnie has been with BUGS since the Fall of 2014. She grew up in Silver Spring, MD and has called Baltimore her home for the last 5 years. She originally moved here to sail and teach with the Living Classrooms Shipboard Program. She was first hired as the Cooking and Nutrition Educator for the BUGS Program. Ronnie has been able to transition from that position to now the STEM (Science, Technology, Engineering, and Math) Educator. Ms. Ronnie's favorite things are executing and teaching cool science projects, playing with her dog, cooking and eating delicious food, and wandering in the woods.

Terry Barnes - Creative Arts Educator
Mr. Terry was born and raised in Baltimore, MD. He attended the Baltimore School for the Arts. He knew that he would be an artist. He loves to paint, sculpt, create stories, and sew. While studying at BSA, he became connected with the Creative Alliance and eventually interned with the artistic director. He was a teaching assistant for the Open Minds Arts After-School and Summer Programs. After BSA, He went on to attend the University Of the Arts in Philadelphia. He loves to be in nature as much as possible. Mr. Terry believes there is no right or wrong way to create art. It's about letting you heart and creativity flow free.

Rachel Bowers - Gardening & the Environment Educator
Ms. Rachel is the Garden & Environment Educator for BUGS. She grew up outside of Baltimore and graduated from the University of Maryland with a degree in Environmental Science. She loves to spend her time outdoors with friends and family---hiking, biking, camping, swimming, picnic-ing, and sitting on her porch reading! She loves to travel and has spent time on farms all over the world. Ms. Rachel loves working in the BUGS garden with students and learning with them about growing plants (and growing ourselves!)

Brittany Graham - Cooking & Nutrition Educator
Ms. Brittany is the BUGS Cooking and Nutrition Educator. She has been with BUGS since the fall of 2015. She grew up in Baltimore and has spent the past few years of her life living, working, and playing in the mountains of Wyoming and Utah. When she is not cooking up tasty treats with BUGS students, Ms. Brittany can be found outside rock climbing, hiking, paddling around the rivers and creeks of western Maryland, and hanging around the campfire cooking her favorite treat of all...S'MORES

Tyone Pompey - Dance & Creative Movement Educator
Mr. Tyone, as a young boy, realized that he had a passion for Dance. He was able to participate at the Cahill Performing Arts Recreation Center. The Cahill Center helped to lay a foundation and growth as a dancer. He was able to return to the Cahill Center and mentor many young people in the Art of Dance. He has been a member of different dance groups, performed in numerous competitions locally and nationally. He is a graduate of Towson University with a B.F. in Electronic Media and Film. Mr. Tyone has been expanding his love for dance, not only to BUGS students, but to other students throughout the Baltimore area.